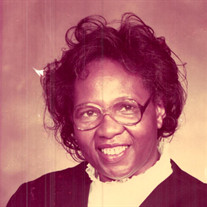 Annie Glenn Parker was born June 25, 1926, to the late Mr. and Mrs. Wince Glenn of Coosada, Alabama. She confessed to Christ at an early age and entered a life of faithful service at the East Chapel MR Church in Millbrook, Alabama. In September... View Obituary & Service Information

The family of Mrs Annie Parker created this Life Tributes page to make it easy to share your memories.

Send flowers to the Parker family.