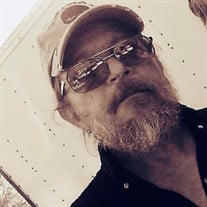 Mr. Anthony Lee Rolan passed on May 7, 2021. Memorial services will be held Friday May 14, 2021 at Yarbrough St. Baptist Church, 1701 Yarbrough Street Montgomery, AL 36110 at 1:00 pm. Immediate family viewing at 12:30 p.m. Mr. Anthony “Tony” Lee Rolan was born in Williamsport, Indiana on December 2, 1955. He died on May 7, 2021 in Wetumpka, Alabama. Tony Rolan was so many things, no single word could describe the man he was. Tony was a precocious and stubborn child. At the age of 6, he walked into a dental office “alone” and asked them to pull his baby teeth out. At the age of 8, he walked into a church one Sunday morning and got baptized alone. That stubbornness followed him all his life. Tony had a very big passion for drag racing, motorcycles and anything that went fast or was ear piercing loud. Tony learned to master Tool and Die making when he was a teenager and continued it until he couldn’t no more. He loved riding his Harley with his biking brothers and sisters. He loved his family. Tony was very close to his brother even though they were 13 years apart. Tony would call or text his brother and sister-in-law everyday to let them know they were on his mind. He was a big brother and always treated his sister-inlaw like a sister. His nephew and nieces loved him so much and he loved them just the same. Tony was the backbone and the glue to his family. Tony spent 34 years of his marriage with his soulmate Sheila Rolan. Never was there a day they were not together. They raised 4 amazing children that Tony would have done anything for. If Tony was not with Sheila or his family he was with his boys Kachina and Suka. His dogs and his wife were the reason he got up every morning. Everyone knows Tony was very loved. He was a loving husband, an amazing father and wonderful grandfather, any person could ever ask for. Tony never missed a family function. For every holiday, every birthday and for anything dealing with his immediate family he made sure he was there. He never missed a chance to capture every moment of happiness. His spirit will forever live in the hearts of his loud, crazy family and friends. Tony leaves to cherish his memories: loving wife Sheila Rolan of 34 years & his two dogs; his children and granchildren, April and Nathan Billingsley followed by Makayla & Cassidi Billingsley, Brandon Rolan & Candace Smartt followed by Jacob, Kaysen & Averianna Rolan, Danika & DJ, Chrissy Kozlowski & Seneral Lee followed by Christopher & Alexis Johnson, Hailey Kozlowski & Jedd Cullars, Cynthia Jackson & Andres Hernandez, Jordon Gardner, Jarmeko Jackson Jr. & JazzaLyn Williams; & his very first great grandchild Elijah Cullars, who he loved so very much; brother (bestfriend), Timothy Rolan, sister-in-law (L’l sister) Patty Rolan followed by Dustin (Nishia) Rolan, Brandi (Justin) Seale & Brittany Rolan (Jordan Goldman); Biker & Drag Racing family, Timmy & Susie Baker, Andy & Kaye Rayborn, Frank & Angie, Kavin & Robin, Kathy & Kenneth, Billy & Ruthie Clevenger, Deborah Clevenger, David Clevenger & his best friend Wayne. Tony was welcomed into Heaven by his mother Anita Joan Rolan, Grandson Andrew Hewston Rolan, daughter-in-law Kalyn Duke Rolan and Regina Greene. Have fun riding your dream bike through the roads paved in gold. Final Arrangements entrusted to Hillside Memorial & Gardens.

The family of Mr. Anthony Lee Rolan created this Life Tributes page to make it easy to share your memories.

Send flowers to the Rolan family.