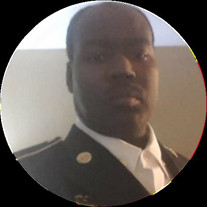 Mr. Antonio Derrell Glenn &#8220;Tony&#8221; was born on October 31,1983 to Rosie Mae Glenn and the late Mr. William Jackson. He received Christ at an early age and united with East Chapel Methodist Church. He served as a choir member and... View Obituary & Service Information

The family of Mr. Antonio D Glenn created this Life Tributes page to make it easy to share your memories.

Send flowers to the Glenn family.