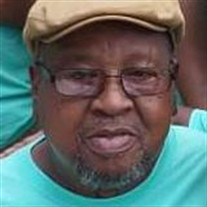 Mr. Arthur Washington was born on May 22, 1953 to the late Mr. Willie Washington Sr. and Mrs. Emma Lewis Washington. He confessed to Christ at an early age and joined Old Augusta Baptist Church, Montgomery, Alabama. He is preceded in death... View Obituary & Service Information

The family of Mr. Arthur Washington created this Life Tributes page to make it easy to share your memories.

Send flowers to the Washington family.