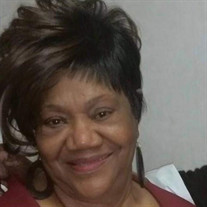 Bettie McKethern 81, a resident of Elmore County transitioned April 13,2022. Funeral Service will be Thursday, April 21, 2022 @ 1:00P.M. @ Eunice M. Mitchell Chapel. Bettie Willeen McKethern a beloved wife of 62 years, mother, grandmother, sister, and dear friend graced this world with her presence on May 20, 1940. She is the daughter of the late Willie Gilbert and Olivia Gilbert Wade. She passed away at home with her family on April 13, 2022 and left a deep hole in the hearts of many at the age of 81.Bettie dedicated her life to Jehovah God on March 23, 1968 through baptism and had a passion for going out in the ministry, preaching and teaching from the Bible. She served faithfully as a Pioneer in the Wetumpka Congregation. Bettie firmly believed the scripture at Isaiah 35:5,6, "He will wipe out every tear from their eyes, death will be no more, neither will mourning nor outcry nor pain be anymore. The former things have passed away." She was a kind soul who loved her family and close friends and loved having fun and making memories. She was united in holy matrimony to Willie Louis McKethern on December 10, 1959. She was sadly preceded in death by her son Lionel McKethern on 09/25/1995 and by her granddaughter Janay Miles on 01/03/2021. She was also preceded in death by her brothers Melvin Gilbert, Doug Gilbert and Charles Gilbert and sisters Bobbie Gilbert and Norma Jean Lykes. She leaves to mourn but cherish her memories: her husband, Willie Louis McKethern of Wetumpka, AL; sons Ronald (Debra) McKethern of Saginaw, MI, Bernard (Connie) McKethern of Colorado Springs, CO, Cortney (Aubrey Ballard) McKethern of Tallassee, AL, and Eric (Yamilet) McKethern of Battle Creek, MI; daughters JoAnn Miles of Lawton, OK, Pamela (Tommie Moon) McKethern of Wetumpka, AL, Lesia Wortham of Colorado Springs, CO and Nicole (Allen) Lewis of Wetumpka, AL; grandchildren whom she loved and cared for many as her own Cortesia McKethern, Trevor Lewis, Lanny McKethern, Aliya McKethern, Mychal Sullivan, Jamar Miles, John Miles, Louis McKethern, Dominique McKethern, Keisha Sears, Shanelle McKethern, Lynia McKethern, Shatita McKethern and Terrance (Sabrina) Cannon; 16 great-children and 1 great-great grandchild; 2 sisters, Laura Mitchell of Wetumpka, AL, and Janette Gilbert of Boston, MA; 2 brothers, Fred (Annie) Gilbert of Rockford, AL and Harold Gilbert of Boston, MA. and a host of nieces, nephews and cousins. She also leaves many dear friends who have been like family to her over the years; Helen Turner, Beverly Davenport, Naomi Hollins, Rita Brown, Marjorie Reed and Martha Weatherspoon, just to name a few., with Hillside Memorial & Gardens directing. There will be a family hour from 6:00P.M. until 7:00P.M. in the Chapel. The repast will be at Martin Luther King Jr Recreation Center ,200 Lancaster St. Wetumpka, Alabama 36092

The family of Bettie Willeen McKethern created this Life Tributes page to make it easy to share your memories.

Send flowers to the McKethern family.