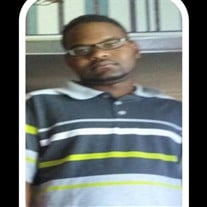 A Time to be Born: Brandon Jamal McGhee was born on July 1, 1988 to Donna McGhee and Edwin Charles Wells in Montgomery, Alabama. A Time to Love: Brandon grew up in Millbrook, and he attended school in the Elmore County Public Schools where he... View Obituary & Service Information

The family of Mr. Brandon Jamal McGhee created this Life Tributes page to make it easy to share your memories.

Send flowers to the McGhee family.