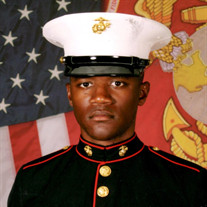 Lcpl D&#8217;Adrien Samone Lucas was born September 29, 1992 in Wetumpka, Alabama to the union of Sam Lucas and Rhonda Hale. He confessed his belief in Christ at an early age and was baptized at New Beginning Holiness Church under... View Obituary & Service Information

The family of Lcpl D'Adrien Samone Lucas created this Life Tributes page to make it easy to share your memories.

Send flowers to the Lucas family.