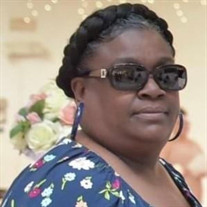 Emma Williams 53, transitioned March 16,2022, Emma Jean Williams was born to the union of the late Charles A. Williams Sr. and Erma Smith-Williams at Cook County Hospital of Chicago, IL. She confessed her love for Christ at an early age and... View Obituary & Service Information

The family of Emma Williams created this Life Tributes page to make it easy to share your memories.

Send flowers to the Williams family.