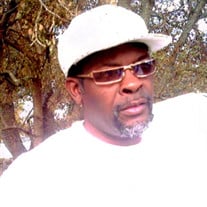 Mr. Gerald Wayne Lykes A.K.A. Snow was born on November 14, 1964, in Deatsville, Alabama to Dorothy Nell Lykes and Joe Lewis Lykes. He graduated from Holtville High School in 1984. He confessed his love for Christ at an early age at St. James... View Obituary & Service Information

The family of Mr. Gerald Lykes created this Life Tributes page to make it easy to share your memories.

Send flowers to the Lykes family.