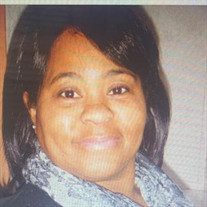 Gloria Grays, age 55, a resident of Wetumpka, Alabama died on December 29, 2020. She was a devoted wife to the late Erwin Glenn Grays, who recently passed away on June 2020. She was faithfully dedicated to her children dearly, grandchildren... View Obituary & Service Information

The family of Gloria Grays created this Life Tributes page to make it easy to share your memories.

Gloria Grays, age 55, a resident of Wetumpka, Alabama died on...

Send flowers to the Grays family.