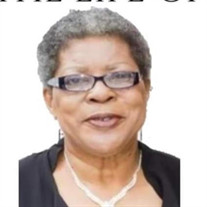 JoAnn Mitchell 76, transitioned March 16, 2022, Jo Ann Mitchell, known affectionately as “MaDear” by her children, was the first-born child of the late Early Campbell and Nora Lou Jones. She was born on June 18, 1945, in Notasulga, Alabama. In her younger years, she relocated to Eatonville, Florida where she resided until her late teens. In the early 70’s, she relocated to Tallassee Alabama, where she married the late Charles Mitchell. Jo Ann confessed Christ at an early age, and was a faithful member of Flat Rock Missionary Baptist Church, serving in the choir and wherever else the Church needed until her health failed. Mrs. Jo Ann Mitchell was the epitome of perseverance, faithfulness, determination, and had a strong love for community. When her husband passed, after being a stay-at-home Mother, she found a way. Jo Ann completed her GED, as an adult while raising her last three children. She furthered her education by taking college courses to enhance her ability to become an entrepreneur. Jo Ann went out into the workforce to support her Family. She held positions at Solomon Sportswear, Auburn Sportswear, Neptune Water Meter Company, and J.S. Tarwater Mental Health Facility. Her love for community was exemplified through her work at Auburn Extension, teaching other women. She helped them gain cooking skills that would provide their families with nutritious meals on low incomes. One of her many accomplishments was also becoming the first female black school bus driver for Tallassee City School System. In addition to these positions at various companies, and raising her children, she was determined to be an entrepreneur. Jo Ann’s entrepreneurial spirit was exhibited, as an AMWAY seller, a self -trained seamstress, and baker. She used these skills to create wedding cakes and tailored custom wedding gowns. Her crown jewel as an entrepreneur was opening a fully licensed restaurant known as Mrs. J’s Soul Food which included a juke joint. Known throughout the community as Mrs. Jo Ann, her desire was to create a place where all were welcome to come eat, hang out, and have a good time. As long as you were not causing any trouble, all were welcome. Jo Ann’s entrepreneurial spirit also led her to becoming an in-home contractor for the Autauga Elmore Developmental Services for people with disabilities. For more than 25 years, she was the single care provider for 4 ladies: Marilyn, Bessie, Evern, and Ruth. A believer in doing everything with excellence, she ensured that each of the ladies had the best of everything. She continued providing care and love for Ruth up until January 6, 2022, despite her own failing health. Jo Ann was a pillar in the community assisting many with employment opportunities and assistance however she could. Many within the community, especially Flat Rock, were thought of by her as extended sons and daughters. One of her lasting community projects was assisting with the launching of Flat Rock Community Picnic. She not only donated her land to be used as a gathering spot, she was instrumental in planning, and offering words of encouragement to all those involved, to never forget the importance of community and love for all. Sharing the Resume of Life, for our beloved “MaDear”, would be incomplete without acknowledging the fact that she made each of her children feel as though they were her favorite. However, her number one supporter, her rock, and caregiver, was Jerome Nathaniel Jones, Sr. aka “Jimmy”. Thank you Jimmy for caring for MaDear. Jo Ann is preceded in death by her husband, Charles Mitchell; she is survived by her ten children: Charles Mitchell (Linda) Wetumpka, AL., Jeri Horne, Tampa, FL., Willie H. Jones, Jacksonville, FL, , Jacqueline “Yvette” Salter (James), Jacksonville, FL. Curtis Haynes (Earline), Lake City, FL., Jack Gholston (Hank), Loganville, GA., Kenneth Mitchell, Valdosta, GA., Arthur H. Mitchell (Natasha), Conyers, GA. and Michael C. Mitchell, Phenix City, AL.; Twenty-five grandchildren, and Fifteen great-grandchildren. Two siblings, Francis Smith, Montgomery, AL., and Clarence Jackson II, Tampa FL., and two very special friends/daughters, Shant Skipper and Freda Skipper. Funeral service will be Saturday, March 26, 2022 at 2:00P.M. at Flat Rock Church, burial to follow at Oak Valley Church Cemetery with Hillside Memorial & Gardens directing.

The family of JoAnn Mitchell created this Life Tributes page to make it easy to share your memories.

Send flowers to the Mitchell family.