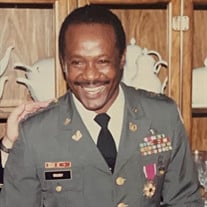 Ret. CW3 Joe B. Crosby (Joe Billy) was born in Elmore, Alabama on 17 December 1942 to Zeke and Sally Crosby. He was the lucky-seventh of their children and grew-up on the family farm in Coosada with fifteen siblings and his beloved grandmother,... View Obituary & Service Information

The family of Ret. Cw3 Joe Billy Crosby created this Life Tributes page to make it easy to share your memories.

Send flowers to the Crosby family.