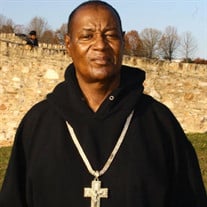 Mr. Joshua O&#8217;neal Broaden (Bo-Pete) was born in Montgomery, Alabama on November 15, 1958 to the late O&#8217;neal Broaden and Lucille Calhoun Broaden. He graduated from Sidney Lanier High School. He gave his life to Christ and loved... View Obituary & Service Information

The family of Joshua Oneal Broaden created this Life Tributes page to make it easy to share your memories.

Send flowers to the Broaden family.