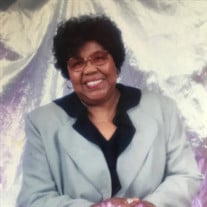 There are times when ordinary words fall short of describing extraordinary people and this is one of those times. The life of Julia Bell McCall Maxie was a life filled with love and laughter; a life characterized by faith, strength, courage, and service to others; a life whose mission was teaching, nurturing, shaping lives, and creating opportunities for herself and others; a life that worshipped and loved God; a life transformed by the light of Christ and dedicated to becoming a light for others. Mrs. Maxie was born in Millbrook, Alabama on June 21, 1933, to Jennett Oliver and Frank McCall. She also had two loving step-parents, Charlie Oliver and Ruth McCall. She was the eldest of eleven siblings, four of which preceded her in death; two brothers, Nebertha and Walter James Oliver, and two sisters, Easter Jackson and Frankie McCall. Mrs. Maxie met and joined in marriage with Mr. Matthew Maxie, Sr. They established a legacy of love to which four children were born. Mr. Maxie and their eldest son, Master McKenzie Maxie, both preceded her in death. She accepted Christ early in life and found in Him the strength to achieve her goals while overcoming the many barriers that challenged the young, gifted, and one of the most determined African American women of her era. She called Jackson Chapel AME Zion Church home, and was a fearless and faithful member until her health began to fail. She accomplished many things during her service. She has been a Class Leader, Trustee, Steward, Leader of Leaders, member of the Lay Council, Missionary Officer, Secretary of Budget and Finance Committee and she worked closely with the many Presiding Elders and Bishops of the Cahaba Conference. She not only worked within her church and conference, but she also helped many other churches in the community. Mrs. Maxie was a cosmetologist and a seamstress, but most of all, she was a businesswoman. She was a pillar of the community and left her mark all over Elmore County. Although faced with many barriers that others would have let stop them, she used those barriers as stepping stones and continued to strive for more. She was the first African American elected to the Elmore County Board of Education. She was instrumental in getting the Town of Millbrook incorporated into the City of Millbrook. She was the first African American to become the Court Clerk and Court Magistrate for the City of Millbrook. In this position, Mrs. Maxie helped many people, both black and white. She helped register people to vote and worked at the polls. She was a proud member of the Alabama Democratic Conference and Leona Chapter #140 Order of Eastern Star. Her presence spoke volumes when she walked into a room. She had the ability to encourage and inspire others, both young and old. Hers was a life fully lived and a job well done. Mrs. Maxie will be missed by many but her legacy will live on through those she has left behind: One daughter, Regenia (Edwin) Jackson, of Columbus, GA; two sons, Matthews Jr. (Gloria) and Anthony (Beverly) Maxie of Montgomery, AL, and one granddaughter/daughter, Lakisha (Robert) Lloyd, of Fayetteville, GA; Two sisters, Mary Louise Oliver and Lucy Alexander of Millbrook, AL.; Four brothers, Clinzy Oliver of Blythewood, SC, George (Minnie) Oliver, of College Park, GA, Rev. Charlie (Fannie) Oliver Jr., of Montgomery, AL, and Osie McCall of Detroit, MI; one aunt, Annie Tucker, Millbrook, AL; Three nieces that she helped raised, Mary Knight, Kenisha Wright and Lamara Stevgens; twelve grandchildren; fourteen great-grandchildren, and many nieces, nephews, other family and friends.

There are times when ordinary words fall short of describing extraordinary people and this is one of those times. The life of Julia Bell McCall Maxie was a life filled with love and laughter; a life characterized by faith, strength, courage,... View Obituary & Service Information

The family of Mrs. Julia B Maxie created this Life Tributes page to make it easy to share your memories.

There are times when ordinary words fall short of describing...

Send flowers to the Maxie family.