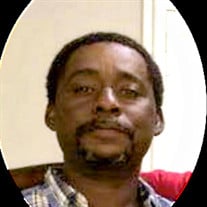 Mr. Lovell Burts (Shawty) was born on September 24, 1965 in Elmore, Alabama. He departed this life on December 8, 2016. He leaves to cherish his memories: A devoted Mother Mrs. Earnestine Zeigler and Father Mr. Essix W. Zeigler of... View Obituary & Service Information

The family of Mr. Lovell Burts created this Life Tributes page to make it easy to share your memories.

Send flowers to the Burts family.