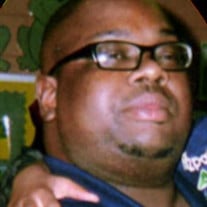 November 17, 1979 to Carol Reed Strickland and Theodore Taylor Jr. He confessed to Christ at an early age. On November 12, 2017 he departed his life at his residence. He was preceded in death by his grandparents; Dewitt Reed, Theodore,... View Obituary & Service Information

The family of Mr. Marquis L. Taylor created this Life Tributes page to make it easy to share your memories.

Send flowers to the Taylor family.