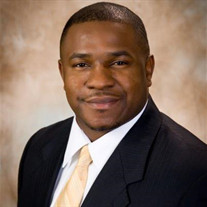 Percy Gill was born on September 7, 1972 in Wetumpka, Alabama, and he is the son of the Late Lorenzo Gill and Idell Gill of Wetumpka. Percy attended Wetumpka High School where he was an accomplished athlete. Percy gave his life to Christ... View Obituary & Service Information

The family of Mr. Percy Bernard Gill created this Life Tributes page to make it easy to share your memories.

Send flowers to the Gill family.