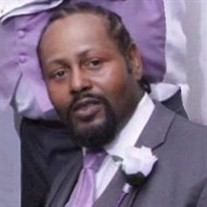 Mr. Shannon Moon Sr., age 47, resident of Montgomery, Alabama passed on April 27,2021. Services will be held on May 8,2021. hannon Quentarian Moon, Sr. was born on a cold evening December 13, 1973 to Emily M. Moon and Tolla Cook (father) in Tuskegee, Alabama. On Tuesday, April 27, 2021 surrounded by his family, Shannon entered into a peaceful sleep on at 3:30 pm. Shannon was raised in Wetumpka, Alabama with his brother Moncre Moon until he was around five years old. The family then moved to Montgomery, Alabama, so his mother could be close the university she was attending at the time. Shannon and Moncre were very happy boys. You didn’t see one without the other. They were known as Bo and Luke Duke, The Duke Boys and their mother was Daisy Duke. Michael Gibson, a precious step-dad, helped raise them. Shannon attended the Montgomery School System and went to college online. He graduated with a degree in Computer Technology. Shannon learned the Bible at an early age. His mother Emily studied with him and Moncre. Emily became a Jehovahs Witness and Shannon and Moncre started studying the Bible with brother Reggie Smith, one of Jehovahs Witnesses. Shannon loved Jehovah’s God and Jesus. He leaves to cherish his memories: a loving mother Emily (Jesse) Stinson of Montgomery, AL; brother, Moncre (Okema) Moon of Atlanta, GA; sons, Shannon Moon Jr., Moncre Tyree of Charlotte, N.C. and Jalen Jabrace of Montgomery, AL; two daughters, Shakela (Diamonta) Moon and Keiondra Moon both of Montgomery, AL; he was also loved and was loved by Ms. Sheila Scott, a very devoted partner; her children whom he loved as his own, Regina (DeAnthony) of Auburn, AL, Curtis, Katie (Christropher) and Kevarciey Scott all of Montgomery, AL; one special aunt Cheryl Wright and a great aunt Mrs. Heneritta Hunt, both of Wetumpka, AL; four very devoted cousins whom he loved Ms. Tonya Denson of Huntsville, AL, Ms. Stephanie Wright of Birmingham, Tee-Tee and Bubba Wright both of Wetumpka, AL; a devoted friend Joey Williams. Shannon also had other siblings not from his mother: brother, Carl Gunn; sisters, Sonya of Wetumpka, AL, Jessica, Jerissa (William), Shinque and Serita of Birmingham. Shannon was a wonderful grandfather to Jakobe and Zavie of Nebraska, Shannon Moncre and Sabastin of North Carolina, Ry’Lee, Da’Layla, Da’Layzha of Montgomery, AL and other grands he loved also from his devoted partner Sheila Scott, Kailey bug, Justice, Triniti, Jaycee, Landon, Cameron, MeKenzie and Tuggie, and a host of nieces, nephews, cousins, other relatives and friends. All one big happy family. His children had a close relationship with their father. He was everything to them, they were his whole world. He attended everything they had. From Jalen’s school plays, to track meet, P.T.A. meetings and other functions. Love you my dear son, you’ll be missed greatly. Hillside Memorial & Gardens directing.

The family of Mr. Shannon Quentarian Moon Sr. created this Life Tributes page to make it easy to share your memories.

Send flowers to the Moon family.