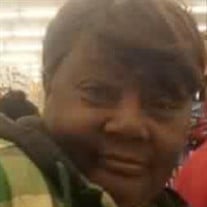 Shirley Jean Thrasher was born on October 7, 1942 to the late Lillie Miles and Curlee Carpenter. She confessed her life to Christ at an early age, where she later joined Mt. Zion Baptist Church in Elmore. She attended Sand town High School. She... View Obituary & Service Information

The family of Mrs. Shirley Thrasher created this Life Tributes page to make it easy to share your memories.

Send flowers to the Thrasher family.