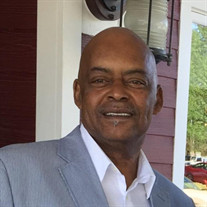 Mr. Toney O'Neal Bozeman, a resident of Laveen, Arizona died on September 14, 2020. He leaves behind his loving wife and soul-mate, Angela Lyles- Bozeman, and was not shy of letting it be known. His eight children; Carlton (ImaEme) Bowman of... View Obituary & Service Information

The family of Toney O'Neal Bozeman created this Life Tributes page to make it easy to share your memories.

Send flowers to the Bozeman family.