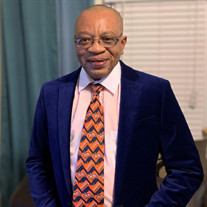 Mr. Tywon Jackson a resident of Montgomery, Alabama age 52, transitioned on December 24,2021. He was preceded in death by his father James Jackson, Sr. He leaves to cherish his memory, his loving and devoted wife of 28 years, Angela LaFaye... View Obituary & Service Information

The family of Mr. Tywon Jackson created this Life Tributes page to make it easy to share your memories.