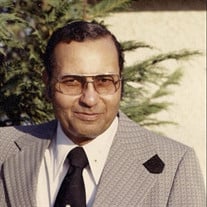 Mr. Willie Hunter Brown, age 93, a resident of Wetumpka, Alabama passed away on May 21, 2021. Graveside services will be held May 28, 2021 at 10:00 am at Hillside Memorial & Gardens cemetery with Hillside staff directing. Willie Hunter Brown will always be remembered as a man of God that lived his life by God’s will and for God. He spent more than fifty-five years as a gospel minister in churches of Christ in California and Alabama. At the young age of ninety-three he was still preaching the gospel and conducting a private Sunday School class until a few short months ago. His planting and watering of God’s word encouraged countless souls to be led to Christ as God gave the increase and added them to the Lord’s church. He will be remembered as a sounding board and shoulder that weary souls could go to at any time for encouragement or lessons in God’s word or a helping hand to those in need. He was born a country boy on the dusty roads of Elmore County Alabama to Edward and Clara Brown, where he and his 16 siblings, who all pre-deceased him, learned the value of discipline and hard work and how to farm and live off the land that God provided. He later joined the Air Force and after World War 2 moved to California and married the love of his life, Helen. In 1987, he and Helen, who pre- deceased him in 2019 after 68 years of marriage, left their home in Santa Ana California and moved to his birthplace of Wetumpka Alabama where they built their homestead. It fostered the well-being of five grandchildren (Danika, Bethany, Paul E, Adam, Michael) and one great grandson (Julian). Willie was the patriarch of a strong lineage of descendants. He is survived by one daughter, Martha, and two sons, Paul and William. He also leaves 12 additional grandchildren, two whom he had a special bond with (Lewis Jr. and Tony), 20 great- grandchildren, 19 great-great grandchildren, a host of nieces and nephews, sisters-in-law, brothers-in-law, one special nephew who lived with him for a short period of time in California (Jerome), and many cousins and church family.

Mr. Willie Hunter Brown, age 93, a resident of Wetumpka, Alabama passed away on May 21, 2021. Graveside services will be held May 28, 2021 at 10:00 am at Hillside Memorial & Gardens cemetery with Hillside staff directing. Willie Hunter Brown... View Obituary & Service Information

The family of Mr. Willie Hunter Brown created this Life Tributes page to make it easy to share your memories.

Send flowers to the Brown family.