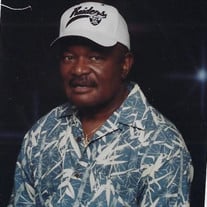 Mr. Willie Jefferson Gossom (Akon) of Fayetteville, Georgia, formally of Wetumpka, Alabama, passed away on February 2, 2021, in a Fayetteville hospital after an extended illness. Mr. Gossom was born on July 4, 1927, in the Gossom Switch Community. He was the eighth child born to George and Mable Williams Gossom. In his early years, Willie attended the Lutheran School and the Lutheran Church in the Gossom Switch Community. He later attended Sandtown School in Millbrook, Alabama. He joined Mt. Zion Baptist Church in Elmore, Alabama, where he was baptized and attended faithfully until he moved to Birmingham, Alabama. Willie’s love for baseball led him to play sandlot ball on the Elmore team, where he was known as “Strike ‘em Out Willie.” In 1946, Willie moved to Birmingham, Alabama, where he became employed with the Birmingham Pipe Fitters. While employed he played baseball with the Birmingham Pipe Fitters Team and the Black Barron’s Team. Willie served in the United States Army. While stationed in Korea, he worked in communications and was responsible for restoring telephone lines. During his service in Korea, he played baseball with his Army team. He was selected as team manager and was called “Home Run Willie.” After an honorable discharge from the Army, Willie returned to Birmingham, Alabama, where he resumed working and playing baseball. He moved to California in the early 1950’s, where he worked for many years and retired from the California Parks System in Sylma, California. In 2005 he moved to Fayetteville, Georgia. He enjoyed traveling, spending time with family and friends, returning to Wetumpka, Alabama, to visit the old home place in the Gossom Switch Community, and visiting Mt. Zion Baptist Church Cemetery in Elmore, Alabama. While home, he loved to walk and reminisce about the “Good Ole Days.” He loved to talk about how he and “Doc” played in their grandfather’s old Road Star (car) and the old cotton gin. He and his cousin, Nathaniel “Hop” Cooper would take turns riding on the handle bars and peddling his bicycle to Wetumpka to see a ten-cent movie at the Fain Theater. He also rode his bicycle to deliver newspapers in Elmore and the Gossom Switch Community. Willie was preceded in death by: his parents, George and Mable Williams Gossom; paternal grandparents, Tom and Mary White Gossom; maternal grandparents, Redmond Williams and Dollie Williams Zeigler; step-grandfather, Payton Zeigler; his first wife, Clara Tankersley Gossom; sons, Willie Gossom and Willie Edmondson; 12 siblings and their spouses, Johnnie Mae Holtzclaw, Katie Likes, George Gossom, Jr., Mable Bowen and her twin brother (who died at birth), Carrie Long, Annie Ruth Massey, Althea Williams, Willie Reese Gossom, Erma Dean Denison, and Dollie Jones Johnson. Funeral Services were held at Mowell Funeral Home & Cremation Service Fayetteville, Georgia 30214

Mr. Willie Jefferson Gossom (Akon) of Fayetteville, Georgia, formally of Wetumpka, Alabama, passed away on February 2, 2021, in a Fayetteville hospital after an extended illness. Mr. Gossom was born on July 4, 1927, in the Gossom Switch Community.... View Obituary & Service Information

The family of Mr. Willie Jefferson Gossom created this Life Tributes page to make it easy to share your memories.

Send flowers to the Gossom family.