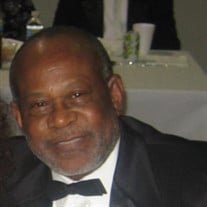 Willie James Thomas 78, transitioned April 26, 2022. Funeral service will be May 3, 2022, at 11:00A.M. at Eunice M. Mitchell Chapel, burial to follow at Wetumpka City Cemetery. On Tuesday, April 26, 2022, our Almighty God in his infinite wisdom, mercy, and grace carried Willie James Thomas to his eternal rest. Willie was born on July 29, 1943, in Wetumpka, Alabama, to Isom and Mary Celia Thomas. He was the second of three children and was preceded in death by his younger brother Frederick Anthony Thomas Sr. Willie accepted the Lord into his life at an early age and was baptized at Second Missionary Baptist Church in Wetumpka, Alabama. He later became a member of Southlawn Baptist Church in Montgomery, AL. Willie graduated from Elmore County Training School in the Class of 1961and went on to Alabama State University (ASU) where he received degrees in Music and Education. While in college he played in the ASU Band for four years. An accomplished musician, Willie played trumpet with the well-known group The Syndicate as well as other local groups. For over 36 years he worked for the Montgomery Department of Education as a band director and teacher. Initiated on May 7, 1966, Willie was a Life Member of Kappa Alpha Psi Fraternity Incorporated. He proudly served as a leader and mentor to countless members of his beloved fraternity. On August 19, 1967, Willie married the love of his life, Dorothy “Dot” Portis and they remained committed and devoted to each other until her death in 2021. Unto their union, one child, Waldron Jared Thomas was born. He leaves to cherish his memories, one son, Waldron Jared Thomas, his sister, Mary Lois (Mike) Thomas-Waters; brothers-in-law Robert (Ruth) Spears of Oakland, CA; Vivian (Bonita) Portis Jr. of Montgomery, AL; Ronnie (Diane) Portis of Fort Wayne, IN; and sisters-in-law Kathryn (Clifton) Anderson of Tuscaloosa, AL; Rose (Ervin) Kinsey of Gardena, CA; Sylvia (Troy) Collins of Rancho Cucamonga, CA; Helen Spears of Grand Rapids, MI; and numerous loving cousins, nieces, nephews, relatives, and friends. with Hillside Memorial & Gardens directing.

The family of Willie James Thomas created this Life Tributes page to make it easy to share your memories.

Send flowers to the Thomas family.